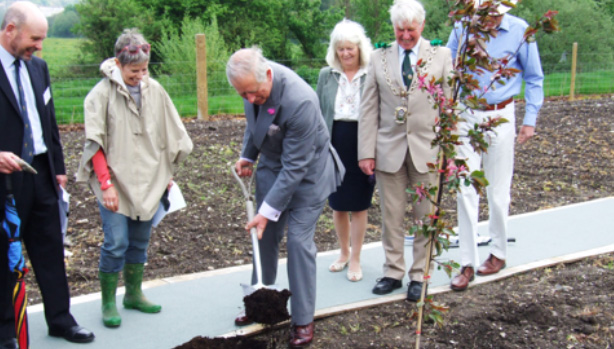 The Duchy of Cornwall reviews the progress at ‘St. George’s meadow’ in Fordington, chats to workers and is involved in tree planting.

On Friday 13th May 2016 Prince Charles visited the St. George’s Meadow development in Dorset’s County Town of Fordington to review progress on the properties that have been designed and built to the Duchy of Cornwall’s ‘Design Standard Specification’. Mildren Construction began work on the development, designed by Morgan Carey Architects, in April 2014 on behalf of their sister company, Mildren Homes, and the £6.8 million build is due for completion in August this year.

The development favours the Mildren Homes ethos by providing affordable housing for local people and comprises 38 private dwellings and 16 houses available to rent and buy, together with a number of workshops. All are being constructed from locally sourced material to create a traditional feel. HRH met with a couple who have just moved into one of 16 completed shared-ownership properties that have now been handed over to the Yarlington Homes Group, and they showed him around their new home. He then reviewed restoration work being undertaken by Mildren Construction Apprentices on a 19th century brick built long bridge that spans the River Frome.

The scheme also features a new allotment block that has been modeled on one at Poundbury and HRH took time out to plant a commemorative crab apple tree.

Mildren’s Managing Director, Chris Wingham said “It is an enormous privilege to be involved in this iconic project. The Duchy has a vision for home building which we are proud to share and the ‘Design Specification Standard’ reflects the high values that we endorse here at Mildren”.

Alongside the crowd of onlookers and media were site workers who came down from their scaffold for a glimpse of the action and were rewarded with an impromptu chat with the Prince.